THE CHINESE LADY at the Magic Theatre

Come check out my next project, THE CHINESE LADY, at the Magic Theatre! Playing October 9 through November 3 in San Francisco. 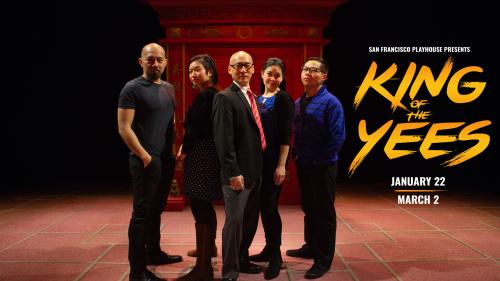 AND WE’RE OPEN! Come check out KING OF THE YEES at San Francisco Playhouse now through March 2!

KING OF THE YEES at San Francisco Playhouse

So excited to begin performances next week for my first show in the Bay Area in four years! Come through if you’re in town:

KING OF THE YEES by Lauren Yee, directed by Joshua Kahan Brody
Where: San Francisco Playhouse, 450 Post Street, San Francisco, CA
When: January 22 through March 2
Starring: Francis Jue, Krystle Piamonte, Jomar Tagatac, Rinabeth Apostol, Will Dao
Tickets & Info: https://www.sfplayhouse.org/sfph/2018-2019-season/king-of-the-yees/
For nearly 20 years, playwright Lauren Yee’s father Larry has been a driving force in the Yee Family Association, a seemingly obsolescent Chinese American men’s club formed 150 years ago in the wake of the Gold Rush. But when her father goes missing, Lauren must plunge into the rabbit hole of San Francisco Chinatown and confront a world both foreign and familiar. At once bitingly hilarious and heartbreakingly honest, King of the Yees is an epic joyride across cultural, national, and familial borders that explores what it truly means to be a Yee.

My birthday falls on or around Father’s Day every year so it can be difficult celebrating life when you’re also thinking about loss. I’ve lived more years without him than with him in this realm.

All my memories of us are paused at age 15:
He walking me home from school and my friend calling him handsome;
He clutching my mom’s hands over my heart as I snuggled between them at night;
He buying me a wholesale box of candies of my choosing at Jetro;
He holding court at our family banquets in Chinatown;
He singing and sounding like a banshee;
He in the driver’s seat of our Oldsmobile (he was not a good driver);
He that had a mole on his cheek with a hair that I’d always want to pull out;
He ordering two hotdogs for us after my doctor’s appointments that’d we’d eat on the M15;
He accompanying me to visit private schools with his spotty English;
He taking time off to attend my elementary school graduation;
He proud of the new house he saved and worked so hard for;
He in his pajamas which would become his uniform after his stroke;
He without use of half his body;
He walking laps in the house as part of his physical therapy;
He on a low-sodium diet, but devouring an entire tray of a cake for which I accidentally used salt instead of sugar;
He, my father, my caretaker, the strongest man I knew, needing me to do his laundry, or empty his bed pan, or refill his water cup or check his blood pressure or hold his arm as he started walking outside again;
He the last day I saw him when we got into another fight about who-knows-what and I didn’t kiss him goodbye because I was so angry;
He in the hospital, silent, unmoving, cold, gone;
He resting peacefully as guest after guest at the funeral reminded me of what a good man he was.

He in pictures and dreams.

He whom I wish were by my side to experience every major life milestone.
He is.

If You Think I Called You…

… and you Googled my number and ended up here, it wasn’t me!

Some sketchy telemarketing company is masking their identity by getting my phone number to appear on your Caller ID.

Sorry this is happening. I’ve called my phone provider. They’re not helpful. Hopefully there will be a resolution.